It seems Mika, Marta and I have become de facto travel buddies this year because aside from going to Brunei last January, we went to Ho Chi Minh a few days ago for another 3 days 2 nights adventure. Unlike our previous trip however, we were accompanied by Mika’s two older sister – Ate Anne and Ate Malou – and our dear friend Maxine.

The vacation planning was done from scratch. We booked a cheap airfare courtesy of Cebu Pacific Air (again) and hotel accommodation at Agoda. We chose Grand Silverland Hotel & Spa located at District 1 near Ben Thanh Market. As for the tour and hotel transfers, I was able to contact Buffalo Tours for it. We were happy at their service because everything was well arranged even in such short notice.

As expected, the 2.5 hours travel is another red eye flight. For some reason, I was happy taking a red eye flight to avoid air traffic at Manila airport. We arrived at Ho Chi Minh around 1 in the morning, local time. There is a one hour time difference between Ho Chi Minh and Manila.

One thing notable upon arrival at Vietnam is that tourist don’t need an arrival card for the immigration. Only valid passport is needed.

Going to the hotel from the airport could be a little tricky since we arrived in an unlikely time. I even read travel stories that a lot of taxis/vans defraud tourist at the airport. Good thing prior to our trip we arranged a hotel transfer. I was really happy that everything was hassle-free.

Thus, we took a 20-minute ride to the hotel.

When we arrived at Grand Silverland Hotel & Spa, our first reaction was “nice”. Considering the price we paid for, the hotel is worth the money spent. The place is not that big for a 4-star hotel but the amenities are okay considering it has a spa, gym and swimming pool.

We were able to settle down around 2am after checking in. We had an early day ahead so we went to bed right after.

We availed a whole day Saigon City Tour which starts at 8am and ends at around 4pm. In short, we had to wake up early in preparation for the whole day ahead. In truth, I was looking forward for breakfast simply because I’M IN VIETNAM!!! The country is known for it’s delicious cuisine, so yes, as expected the food is great.

By 8am our tour guide, Thanh, picked us at the hotel lobby and this is where we went: 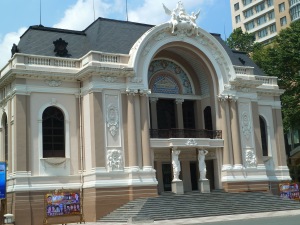 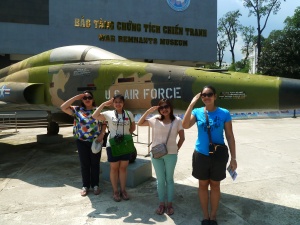 After the whole day tour, we went back to the hotel and rested for a few hours. We then went to Ben Thanh Market which is just a few blocks away from our hotel. We bought a lot of candies, coffee and other pasalubong for a cheap price. Good thing Marta has talent for haggling so we practically just followed her in dealing with the seller.

We went back again to the hotel to drop our things and roamed around the District for a good place to dine. We were adventurous that night so we opted the local ambiance. Ate Anne saw this restaurant where a lot of Vietnamese eating, so yes, we tried it.

Since the menu was in Viet, I don’t know how my co-travelers were able to order from the menu. Maxine was extra daring that night that she even ordered frog as an entree.

After eating, we went back to Ben Thanh Market for one last round to check out their night market and afterwards, to the hotel so we can hit the bed early. Thus, we went to sleep.

We have no particular plans for our last day. In short, it’s killing time until we go to the airport later that night.

My friends and I slept the whole morning until check-out. After leaving our bags at the concierge we took a taxi to NowZone Fashion Mall and thereafter at Diamond Plaza. We were able to kill a few hours at those malls before going back to the hotel to wait for our airport transfer.

Thereafter, we went back to the reality of Manila.

2 thoughts on “The Heat is on in Saigon”